Interview with the creator of iExit

The following interview was with Evan Metrock, developer of iExit.

Metrocket Software is a mobile app development company that is currently focused entirely on the iExit app for iOS and Android. It is headquartered out of Innovation Depot, an internationally-recognized business incubator, in Birmingham, AL.

I was working full-time as a software engineer for Careerbuilder.com when Steve Jobs announced that 3rd party developers would be able to make apps for the relatively new iPhone. I, like many software developers at the time, decided to download the iPhone SDK and play around with it. It took me about 6 months of after-work time to develop my first app: Live Music, a location-based concert finder that pulls concert data from Pollstar.com. Around this time I came up with the high potential idea of iExit, but realized that it would require my full attention to realize that potential. So I quit my job at Careerbuilder in September, 2009 and founded Metrocket.

Once I started teaching myself how to build iPhone apps, I found myself brainstorming ideas for apps all the time. It was on a road trip during this time where the idea popped into my head. Everyone’s used to seeing the countless billboards along the interstate and not devoting much thought to them. But since iPhone apps were likely on my mind, I started noticing that almost all of the billboards were of the template “Some Business, Some Upcoming Exit”, and it dawned on me that the iPhone was capable of delivering these messages to me, the traveler, in a much better way. At that point, the iExit concept was born.

4) Can you share any of the challenges that you may have faced in creating/developing iExit?

I think the biggest challenge was getting started. My background was in web development, so the concept of creating software specifically for phones was foreign to me. And as a result, it was a slow process to learn how to build iPhone apps. I can’t overstate how frustrating it was at times when things just weren’t working. But like anything else, if you stick with it, you’ll eventually break through the road blocks, and sure enough my moment of clarity finally came and things started to click.

Specific to iExit, one of the biggest challenges I faced early on was “How do I develop an app that I can only test if I’m traveling 70 mph on the interstate?” I realized I would have to figure out how to build a “test mode” to iExit where it would simulate an interstate trip. To accomplish this, I built a separate app that would record my latitude/longitude points as I physically drove around the interstates of Atlanta (where I lived then). I then got home and exported the location data from this app and imported it into iExit, where when started up in “test mode”, it would replay that drive around Atlanta. I could then test iExit on the interstate while sitting at my desk. I’m pretty sure I threw myself a party when I finally figured this one out.

5) What makes your iExit app stand out from similar apps?

It’s also a common misconception that iExit is a navigation app. Navigation apps, or GPS systems, are designed to tell you how to get from point A to point B; every other feature is secondary. iExit assumes you know how to get to point B and is primarily designed to tell you where to stop along the way. While it’s true that a GPS system can help solve the “where should we stop?” problem, it’s significantly easier and faster to solve with iExit.

6) What's the thought process behind offering your app at a reduced price for a limited time?

We decided to lower the price from $1.99 to $0.99 as a marketing experiment a few months back. We’ve been happy with the results of the price reduction, particularly that iExit has consistently been able to retain the #1 Paid Travel spot, so we plan to leave it at the reduced price for the foreseeable future.

7) You just recently had an update to the app; Can you share with us any potential features that might be coming in the near future for iExit?

We are currently on version 4.8 for iExit for iOS. For our Android version, we have a major update due out in the next month that will bring iExit for Android up to the same feature set as the current iExit version.

We are also currently working on version 5.0 for iOS, which is also due out in the next 4-6 weeks. This will be a major update that will contain a much improved search experience, a massive refresh of our point-of-interest database, and more deals and promotions.

8) Who is the target audience for your app?

The target audience is quite simply anyone who travels and owns a smartphone. The most common types of users would be truck drivers, RV owners, and families on a vacation. As such, we have added special, preset modes in iExit for these three groups so that it’s even easier for them to open up iExit and find what they’re looking for.

9) What's some of the general feedback you have received from users?

Generally speaking, users love iExit, and our feedback in the App Store reflects that. Our Android version has been neglected as of late, but we are confident they will love the new update once it’s released in the coming weeks.

One of the more popular requests for iExit is to display gas prices at upcoming exits. We are heavily considering this feature, but there are a number of complications involved that we’re still working through. We have a feedback mechanism within the app that allows users to suggest new features, and it’s worked great over the years. Our users have great ideas and have helped drive iExit’s direction.

My most used app would have to be the Twitter app, but from a software builder’s standpoint, one of my favorites is Shazam. Shazam is a music app that will listen to 10 seconds of a song and then identify it for you. It’s one of those apps that even the most computer-illiterate person can learn to use, yet the technology and innovation that went into building it still amaze me to this day.  Shazam is one of the best examples of turning complicated technology into an easy-to-use user experience. 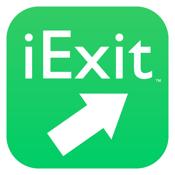