Interview with the creator of Action! 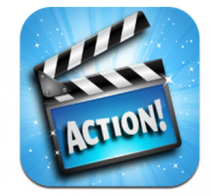 The following interview was with Michael Yuen, developer of the Showbucks Action! Charades app.

1)   Tell us a little bit about your company

Showbucks is a San Francisco-based mobile entertainment technology company. Our mission is to bring human creativity and face-to-face interaction back to social networking by combining social video with social games technology. Turner Broadcasting is an investor.

I started my tech venture creating 3D online games to promote movies and TV shows including The Titanic, The Fifth Element, and Xena - Warrior Princess. The iPad and iPhone with built-in front cameras provide the perfect platform for me to try new ideas to entertain people.

3) What was the thought process behind creating Action! Charades?

I was not satisfied with the existing crop of “social’ games that limit users to playing with avatars in virtual worlds. There was no face-to-face social interaction with real people. There was no creativity. Just repetitive, robotic actions that had little emotional content and no social value. And I was not impressed with the existing “social” video apps that let you share random videos or chat with strangers.

I wanted real social apps that let me interact with real people. There was none in the market. Social games and Social video both offer something I like. So my solution is to combine the best of both worlds. Take social video which gives us real people, combine it with the gameplay and challenge of social games, and Showbucks is born. Charades is a classic party game that everyone loves. So we made a Video Charades game. In our version you can talk, sing and dance!

4) Did you experience any difficulties when developing this app?

5) How often do you play Action! Charades?

I play everyday, or rather I curate our videos everyday. We have a Wall of Fame. Anyone can share their Video Charades on the Wall and let others watch their video and guess the word. I have to make sure the videos are appropriate. I must say our members create more funny videos than YouTube on a daily basis. It’s the best time of my day because they always make me laugh and I don’t laugh easily. I end my session with a hardened grin on my face.

6)   What's the thought process behind offering a free version with in-app purchases?

I figure Action! will appeal to teens and young people initially because older folks are too self-conscious to see themselves on video. And teens don’t have money to spend. So we have to start free and then sell virtual goods to hard-core players.

7) How does your Action! app stand out from similar apps?

We have more LOLs and LMAOs than any other apps. It’s the funniest and most entertainment app in the App Store. Everyday I go to our Wall of Fame and check out the latest comments on the Featured videos. Half of them are LOLs and players saying how happy they are playing our games. I don’t get that from any other apps.

8)   Can you share with us the funniest video you've seen or the toughest charade you had to guess?

We have a “Dance Style” word category. It’s always funny to see different renditions of Disco, Gangnam Style, Macarena, etc. The toughest Charades are movie titles because there are many ways you can act out a movie title like The Lion King. I got stumped many times even though I made up all the words.

9) What's some of the general feedback you have received from users?

People like to laugh and to be challenged. Action! Video Charades provide you laughter and challenge in 10 seconds or more. We have hundred of comments for videos on the Wall of Fame. Half of them are LOLs and people telling us how much they enjoy the game. Some players want us to put more difficult Charades on the Wall. And when we do they say it’s too hard. So we put some good and easy ones, and some hard ones.

I like Draw Something and SongPop. They are very well designed entertainment apps. But they won’t make you LOL like Action! Video Charades.